Masuk High School’s robotics team ended their season this year with an impressive performance on the VEX world stage. They even broke some of their own records!

Team v.exe had an 8-2 record and finished 11thout of 96 teams. This made them Masuk High’s first team to finish in the top 15 in a VEX worlds division. They were also the first Masuk High school team to captain an alliance in the elimination round of VEX worlds.

Team VEXoskeleton finished with a 6-4 record and with a final rank of 33rdout of 97 teams. They were the only team from New England to make it past the quarter finals and into the semifinals of a VEX worlds division in the last 6 years. During the alliance round matches, they upset the number 8 seeded alliance as well as the top rated alliance in their division, losing a hard-fought match to the 5thseeded alliance.

Jockey Hollow Middle School’s team, Vexothermic Reaction, finished with a record of 7-3 and with a final rank of 17thout of 92 teams. They are the first Jockey Hollow team to have a final record above 500 and advance to the alliance rounds of the Middle School World Championships. They were also captain of the 13thseeded alliance which was another first for the program.

The VEX Robotics Competition, presented by the Robotics Education & Competition Foundation, is the largest and fastest growing middle school and high school robotics program in the world. Each year, a new engineering challenge is presented in the form of a game where students build an innovative robot, with guidance from their teachers and mentors, to compete year-round. This program not only teaches the students valuable engineering skills, but the students also gain important life skills like collaboration, project management, and critical thinking.

Masuk High School’s Robotics program was the only program in New England that qualified more than one team to compete in the alliance rounds. As a sponsor for the Masuk Robotics Team, we could not be more proud of them. 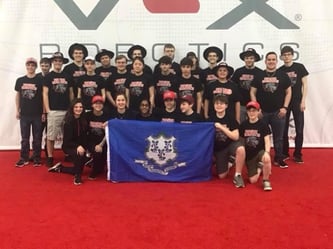 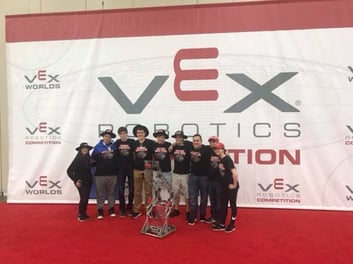 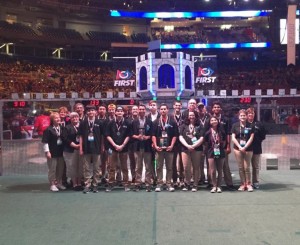